When Elizabeth Teisberg and Scott Wallace established the Value Institute for Health and Care in 2016, the goal was clear: to become the international nexus for the implementation of high-value health care.

Launched jointly by the Dell Medical School and McCombs School of Business, the institute aims to serve as a resource for those looking to transform how care is delivered.

“What we’re trying to do is restructure health care globally so that it is organized around how people experience health and focused on delivering the outcomes that matter most to the people being served,” said Wallace, the managing director and co-founder of the Value Institute.

Prior to his time as an associate professor at The University of Texas at Austin, Wallace assisted in the creation of Dartmouth College’s Master in Health Care Delivery Science program and served on the faculty for Harvard Business School’s executive education program on health care strategy.

In 2019, the team at the Value Institute identified an issue and turned it into an opportunity. Although they knew the work of transforming health care is a global effort, they realized that a gathering space didn’t exist, specifically for the people working to transform health care globally.

“There are lots and lots of conferences, but they’re not focused on the people who are doing this work,” said Wallace. “What we wanted to do was engage people in a conversation and help each other out.   ‘Hey, what's going well for you? What are you doing? What do you know? Where are you struggling?’ That idea of a community coming together is important.”

This idea ultimately resulted in the Redefining Health Care Summit in Barcelona this past April, which attracted more than 100 patients, clinicians, care teams, caregivers, administrators, payers, policy makers, advocates and other health professionals from 22 countries.

But there were more than just a couple of obstacles during the planning process. In addition to navigating the pandemic, which delayed their schedule by more than two years, the organizers were tasked with not only assembling a multinational event but also figuring out how to break the mold of traditional conferences.

In 2021, a planning team for this event was put together by Wallace and Elizabeth Teisberg, executive director of the Value Institute. Teisberg has joint faculty appointments with Dell Medical School and the McCombs School of Business and is a co-creator of the concept of value-based health care delivery.

Teisberg advises organizations around the world on transformational innovation and the implementation of high-value health care. She is also a senior associate at Harvard’s Institute for Strategy and Competitiveness and is best known for her book, “Redefining Health Care: Creating Value-Based Competition on Results,” co-authored with Michael E. Porter.

Wallace looks back with a smile on one memory from an early meeting.

“About a year ago, we said, ‘We’re going forward with this conference. This is a big deal. It’s going to be international; we’re going to do it in Barcelona. We need to think about content,” said Wallace.

Just 20 minutes into the meeting, one colleague said, “You know, I didn’t want to say this out loud, but I think I really should: I hate conferences.”

Wallace thought, “OK, thank you for your input. That’s interesting.”

Then another colleague on the team chimed in, saying she didn’t enjoy conferences, either.

“Then Elizabeth Teisberg, of all people—the co-director of the Value Institute—said, ‘You know, I hate conferences, too!’ ” laughed Wallace. “Then Elizabeth had one of her brilliant insights. She looked up and said, ‘But you know what I do love? The coffee breaks.’ ”

Stopping to think about it, Wallace said, the team characterized the last conference they’d attended as “Death by PowerPoint” for 45 minutes per session, or sometimes longer. So this time, they decided to take a different approach, which included pivoting from a conference to a summit format, connoting that people won’t be talked at, but talked with.

“The real driving theme of it became, ‘What is so important about a coffee break?’ We realized that the reason is that people want to talk to each other,” said Wallace. “They want to learn from each other. They want to teach each other, and they do more of that in the coffee break than you could ever do sitting in a session getting talked at.”

Takeaways from a Fresh Approach

To execute this new strategy, the team didn’t bother with renting projectors. They also decided against keynote speakers. Instead, they asked people to lead short discussions—in the vein of TED Talks—and included patients as full participants in the event.

“We broke people into four groups based on clinical areas: childhood, cancer, chronic disease and primary care,” said Wallace. “We set the whole thing up as a series of small group discussions with six or eight people and a facilitator around a table, sharing insight on a topic.”

He added, “We had patients sitting in the room, saying, ‘Wait a second, this is [what’s] important to me. What you’re talking about over here, that’s nifty—but I want to make sure that we’re thinking about these issues that are important to patients.’ ”

The Value Institute framework supports the implementation of value-based care, which includes organizing care around defined patient segments, or individuals with shared health-related needs, rather than departments or specialties.

To illustrate, Wallace used an example of a person with Type 2 Diabetes, who might need to visit a dozen different health care providers to manage their condition. The patient might need to see an ophthalmologist for retinal problems, a nephrologist for kidney trouble and a cardiologist for associated heart conditions, making numerous costly, time-consuming visits to address just a few of the issues that typically afflict a person with diabetes.

“We know that people with diabetes are going to need all of these services, so the question is, why do we have the services organized around the providers and not patients?” said Wallace. The answer, he and his team believe, is to flip the script and focus on serving patients.

The Value Institute utilizes the Experience Group methodology developed by Wallace and Teisberg. The Experience Group is a unique human-centered research technique that gathers people with shared medical circumstances and informs clinical teams about gaps in care, patients’ obstacles to health and the outcomes that matter most to them.

The insight provided to clinicians, care design teams and employee benefit designers, among others, allows them to transform to value-based care and benefit models. Yet the approach is sometimes received with skepticism from providers.

“You’re trying to tell people to completely redo everything about their professional affiliations, about how they’ve organized their business structures, and to do it this other way,” acknowledged Wallace. “But when people do it, they realize it’s really compelling. The outcomes are dramatically better. The clinicians are happier, and patients are more successful. It just works.”

Such results have been measured by high-value health care teams working within the Value Institute framework, said Wallace, although it may take time for more traditional providers to catch up.

For instance, he points out a surprising fact that few people know about the medical industry: Most doctors don’t actually track their patients’ outcomes. They’re often busy packing patients into their schedules, leaving little time for follow-up. But under the new care model, part of the transformation lies in the goal of moving from volume to value.

“Right now, we pay for the volume of services that are delivered,” said Wallace. “If you are a doctor and I’m an insurance plan, I will count how many patients you saw in seven or 15 minutes. Did you make those people better? Well ... you get paid because you saw that many people. Instead, we want to move toward a system that rewards people for outcomes. If we’re not measuring outcomes, that's really hard.”

Another major takeaway from the summit was the realization that many of these issues aren’t unique to a specific region; there is overlap in many of the current challenges facing health care.

“Anybody working to transform anything—health care, education, government, etc.—knows it is lonely work. It is hard to change systems,” said Wallace. “But I think people were really surprised to discover the commonality of their challenges and went away feeling really enthused.”

While a silver bullet doesn’t exist for this level of transformation, Wallace points out that momentum is mounting.

“There is no single government policy that’s going to get implemented to fix everything,” said Wallace. “It’s a series of a bunch of small changes. Those small insights, those small steps that people realize others had taken, accumulated into really big, impactful changes that are really motivating people.”

Wallace considers the Redefining Health Care Summit a monumental success, thanks in part to financial support from the Campus Internationalization Event Fund offered by Texas Global. The fund accepts proposals for up to $10,000 from academic units sponsoring globally oriented events that include multiple colleges and schools and reach broad and diverse audiences.

“We feel very supported by Texas Global, [senior vice provost of global engagement and chief international officer] Sonia Feigenbaum and the team that really helped us make this all go forward,” said Wallace.

“Having people cheer for you, who are helping remove the obstacles and the roadblocks and who are really trying to accelerate what you’re doing, is so important. We are feeling really good on lots of levels.” 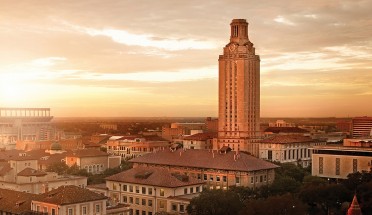 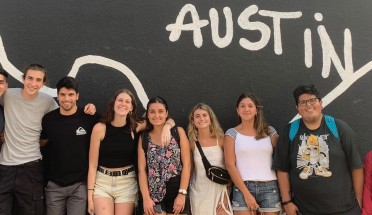 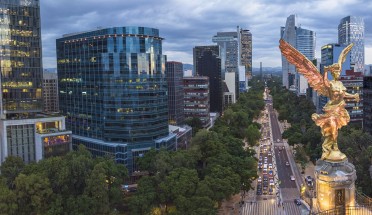