Forty years after he won the Nobel Prize for Literature in 1982, the legacy of Colombian author, journalist and screenwriter Gabriel García Márquez lives on in the exhibition Gabriel García Márquez: The Making of a Global Writer.” The exhibition at the Museum of Modern Art (MAM) in Mexico City, derived from the author’s original archives stored at the Harry Ransom Center (HRC), was originally presented in 2020 at The University of Texas at Austin.

Following the writer’s death in 2014, the García Márquez family selected the Ransom Center to preserve the author’s archive of papers, photos and videos. Last month, the literary treasure trove traveled to Mexico City, where “Gabo,” as he was affectionately known, spent many years of his life. The exhibition is generously funded by Pilar and Jaime Dávila; Mr. Dávila received his bachelor’s degree from UT Austin in 1970.

Remembering Gabo Through His Work

The exhibition explores how García Márquez emerged as an international success after he published “Cien Años de Soledad” (One Hundred Years of Solitude) in 1967, his Nobel Prize-winning novel.

It’s said that the idea for the book came while García Márquez was driving his family to the beach town of Acapulco for vacation. When inspiration struck, he turned the car around and drove everyone back home to Mexico City so he could begin writing. He worked on the novel every day for the next 18 months.

García Márquez’s manuscripts are just some of the 300 works that make up the exhibition, drawn from the archive that includes more than 2,000 pieces of correspondence, drafts of his 1982 Nobel Prize acceptance speech, more than 40 photograph albums documenting all aspects of his life over nearly nine decades, the typewriters and computers he used, and numerous scrapbooks meticulously documenting his career via news clippings from Latin America and around the world. Materials by contemporaries William Faulkner, Ernest Hemingway, James Joyce, Virginia Woolf, Jorge Luis Borges, and Julio Cortázar accompany the collection.

The Making of a Global Writer

“Generation after generation, readers find in his works characters, situations, events, feelings, memories... that are meaningful to them,” said the exhibition’s curator, Álvaro Santana-Acuña.

Santana-Acuña is an assistant professor at Whitman College and the author of “Ascent to Glory: How One Hundred Years of Solitude Was Written and Became a Global Classic,” an award-winning study of the conception, production and circulation of one of the best-selling Spanish-language novels of all time.

The night before the opening at MAM, several members of the Ransom Center Advisory Council and friends enjoyed a private reception and dinner with the curator as well as MAM Director Natalia Pollak Bianchi.

The MAM celebrated the grand opening of the exhibition the following day, June 18, 2022, at its facility in Mexico City’s beautiful Chapultepec Park, which is nearly twice the size of New York’s Central Park and home to several museums, botanical gardens, a large lake, and a zoo.

The ceremonies began with remarks from Ennis, Pollak Bianchi and the ambassador of Colombia in Mexico, as well as representatives from the Minister of Culture of the Government of Mexico and the Instituto de Bellas Artes.

Afterward, the doors opened to more than 200 visitors from the general public. Guests were invited to enjoy cocktails in the museum’s garden and witness performances of Colombian music and dance, courtesy of the Colombian Embassy.

The exhibition at Mexico City’s Museum of Modern Art runs through October.

To further celebrate the connections made by the exhibition, 20 UT Austin alumni and friends were invited back to the MAM a week after the grand opening for a special event sponsored by exhibition benefactors Pilar and Jaime Dávila.

Ambassador Rosalba Ojeda (M.S. ‘75, library science), who serves on the Ransom Center Advisory Council, was instrumental in bringing the exhibition to the MAM. Both the ambassador and Texas Global Director of Global Alumni Relations Fiona Mazurenko gave opening remarks.

Also in attendance were Director of Development for Latin America Pedro Lozada, Director of the Mexico Global Gateway Valerie Cárdenas and several leaders of the Texas Exes Mexico City Chapter.

Guests delighted in a private, after-hours tour of the exhibition with Santana-Acuña, who was joined by his wife, Jenny Rodriguez. Following the tour, guests enjoyed a sunset reception at the museum. 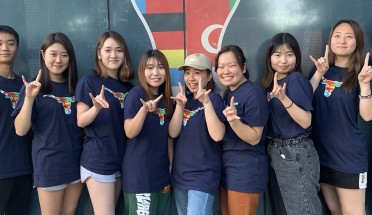