Omar Albarghouty, journalist for Asharq News, comes from a family of language learners. In 2011, he moved from Saudi Arabia to the Forty Acres to take classes at Texas Global’s English Language Center (ELC). In doing so, he joined his father and sister in becoming international Longhorns.

“Being an avid learner when it comes to human languages and world politics or international relations is not something unusual in my family,” he said.

His father had previously earned a master’s degree from The University of Texas, and his sister was enrolled in a bachelor’s degree program when Albarghouty arrived in Austin to take two semesters of speaking, listening, reading, writing and SAT prep courses at the ELC.

“I still remember the ‘welcome day,’ when instructors introduced all the new students on the first day of the semester in a big hall,” Albarghouty said. “They gave us, the massive audience, valuable advice. It was an arduous task to become familiarized with the campus in my first week at UT Austin. But after one knows his/her way around campus, UT Austin becomes the most beautiful and unforgettable campus.”

Albarghouty made the most of his time at UT, creating memories with the UT Austin Dabke dance team and the Arab Student Association.

“In one of the [Dabke] shows, I was very nervous to dance in front of tens of, if not over a hundred, people,” Albarghouty said. “I stood still in the first few seconds and missed the first move while the rest of the team started. Thankfully, I was able to start moving, and the show went well. I’m not sure about my timing with the rest of the team, though!”

“One time, one of the Bahraini students invited me to join a trip out of Austin,” Albarghouty said. “I was surprised to see that Rachelle Bumgardner [ELC special programs and sponsored students coordinator] was on the trip, along with other instructors. It was, without a doubt, one of the best trips I have ever had with my friends — and Rachelle, whom I got to know even better on that trip — while experiencing the breathtaking nature of Texas.”

During his two semesters at the ELC, the course curriculum prompted Albarghouty to engage creatively with the English language in ways he had not done before. He wrote haiku poems and short stories. He read both fiction and nonfiction in English, including Outliers, Room, and a book that explained English idioms.

“I loved that the instructors encouraged us, the students, to speak freely and express our different opinions and emotions after finishing reading whatever we were tasked to read, and there was no wrong or right,” Albarghouty said. “In fact, they made it clear that to make mistakes in English when speaking, reading and writing is the only way to learn. All of the instructors that taught me were terrific, and to this day, I still remember every single one of them.”

Albarghouty not only improved his English skills at UT Austin but also gained cultural knowledge. He credits his time at the English Language Center with preparing him to enter college and to secure internships and jobs afterward. In 2017, Albarghouty graduated from West Virginia University with a bachelor’s degree in linguistics and a focus on Spanish and French language and literature.

This international language learning formed the basis for his future career. In 2019, Albarghouty landed an internship in New York City with the Saudi Mission to the United Nations. After his internship concluded, he went through three interviews with Asharq News, culminating in an extensive surprise test in the Saudi capital. He was hired during the pandemic and had to wait nearly a year to move to Washington, D.C., where he now works for Asharq News, training to become a correspondent back in New York.

“The knowledge in English and in life that I acquired during my time in Austin definitely helped me earn good grades in my college years,” Albarghouty. “Now, I use English every day at work, since my training concerns the news coming out of the White House, the Pentagon and the State Department.”

Albarghouty excelled as an ELC student, and his English studies expanded his world view and professional skills. Now as a Longhorn alumnus, he continues to experience the career-influencing, life-changing power of language learning.

“I truly had the best instructors and was enrolled in such a terrific program, the ELC at UT Austin,” Albarghouty said. “I learned so much, met new exciting people, and made long-lasting friendships.” 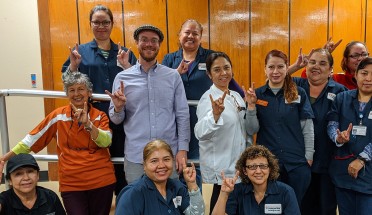 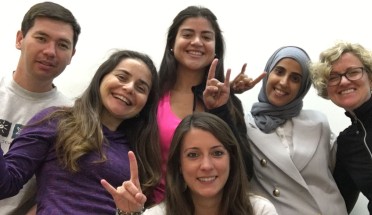 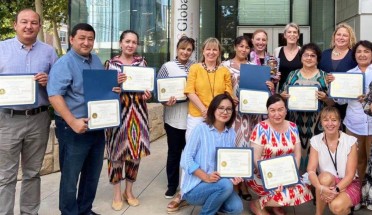