Back to Alumni and Giving

Back to Alumni and Giving

“All my life I had this small-town mindset,” says Resendiz, an accounting junior at The University of Texas at Austin. “Most people never leave Floydada, and I figured that’s where I’d probably end up.”

Now, thanks to an education abroad scholarship created by a Texas Ex, Resendiz is getting the opportunity to go far beyond the city limits of her 3,000-person hometown, and even Austin—she’s getting to see the world. 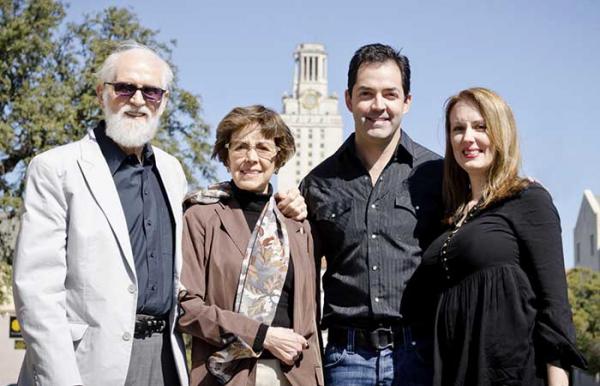 In 1991, Dr. Lucho Rossman was a Plan II honors major at UT with plans to go to medical school. Though he’d never really thought about studying abroad, Rossman’s interest in international travel was piqued by a semester spent in France as a child and his parents’ experiences in the Peace Corps. But the real deciding factor was receiving a $1,000 scholarship from the university to support his travel.

“At the time I thought, ‘The university is endorsing this, so studying abroad must be important,’” says Rossman, who graduated in 1993 and is now a radiologist at The Methodist Hospital in Houston.

Rossman’s time abroad in Seville, Spain, ignited a lifelong passion for travel and taught him many invaluable cultural lessons.

“The experience taught me so much about different parts of the world,” he says. “I realized that I actually have much in common with people who, at first, seemed different from me.”

The long-lasting benefits of his experience overseas prompted Rossman and his wife, Jessica, to establish a UT Education Abroad scholarship honoring his father Charles, who was a professor on the Forty Acres for 41 years, and his mother, Marcela. The Charles and Marcela Rossman Scholarship for Study Abroad is given to an undergraduate student enrolled in a university-sponsored study abroad program each year. Resendiz is the scholarship’s first recipient.

“I want to help other students access the experience of studying abroad,” Rossman says. “I am also incredibly proud to honor my father’s UT legacy in a way that acknowledges his passion for education and The University of Texas.”

The scholarship also commemorates Charles and Marcela’s 50th wedding anniversary and the birth of Lucho and Jessica's daughter, Reagan, last year. It represents the family’s combined desire to provide students with the same kind of help Rossman received when he was a Longhorn.

“"My wife Jessica and I are honored to be able to encourage and facilitate the experience of studying abroad,” Rossman says. “Traveling as a student is an integral part of a well-rounded college education. ”

If it weren’t for their help, Resendiz says, she wouldn’t have been able to study abroad at all during her time at UT. Armed with the Rossman scholarship, she’s now hoping to travel to Buenos Aires this summer to take accounting courses at the Universidad de San Andrés.

“I would like to tell [the Rossmans] that this scholarship is greatly appreciated,” Resendiz says. “They are giving people tremendous opportunities and influencing others in ways they probably don’t realize: they’re inspiring others to give back later on. That’s definitely something I’d be interested in doing in the future, creating my own scholarship and paying it forward.”