For liberal arts student Fiona Hua, gaining cross-cultural communication skills was both a personal and professional ambition. Before she studied abroad and interned in China, the Global Professional Training program on East and Southeast Asia gave her the opportunity to interact with people from around the world and build a network of like-minded, globally-engaged peers she could learn from and connect with throughout her career.

“I am passionate about learning about different languages and cultures, and more specifically about my own cultural background—Chinese,” Hua said. “GPT's ability to bring both domestic and international students together and promote social engagement is something that I really value.”

The two-day program, held every fall semester for the past six years, is one of the only internationally-focused conferences on campus available to all students. The program includes discussions on political issues in the region, cross-cultural training, career opportunities and networking, and cultural food and activities.

Journalism professor Tracy Dahlby, who worked as a news reporter in China and Japan, was the keynote speaker at this semester’s conference, and said students interested in living in Asia should fully involve themselves in a different culture and environment.

“Today, immersing yourself in a country and culture is even more important than it’s ever been,” Dahlby said. “Pick a part of the world you can fall in love with and plant yourself there for at least two years. You’ll wind up knowing something about its people, its language, its politics, its loves, hates, and idiosyncrasies, the alarming as well as the charming. You’ll be surprised where it takes you and what you’ll see.” 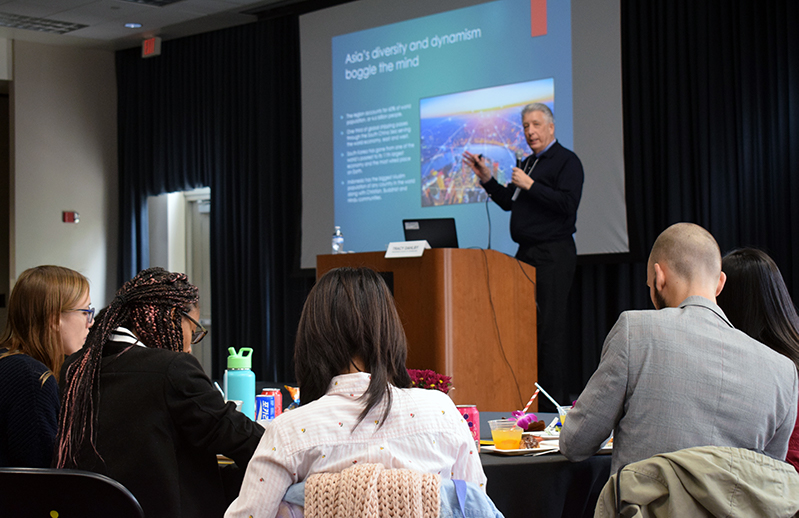 Throughout the program, held during International Education Week in November, students participated in presentations, group sessions and panels, and learned how to incorporate their regions of interest into their future career goals. Session topics included briefings on east and southeast Asian cultures, inclusive leadership, education abroad in Asia and more.

Senior Haley Tilley, east Asian studies & Korean culture and language double major, has been on the GPT student council throughout her four years at UT. She says the program has opened several doors in her professional and educational career, including networking events with senior university leadership and invitations to speak about her education abroad in South Korea.

“These (are) opportunities that I would not have been able to experience without being involved in GPT,” Tilley said. “Getting to make new friends, listening to others' stories and learning how much of an impact GPT really has had on the alumni has been the most fulfilling for me.”

The program was so impactful for Fiona Hua, she became a GPT student leader to encourage her peers to engage with different cultures.

“I think that one of the most important things is being able to learn from one another and having the ability to communicate with people with an entirely different culture and values,” Hua said. “One of the most special moments as a leader is seeing the enjoyment and the relationships being formed from an event that we spent months planning. Knowing that everyone had a good time and left with new friends and lasting memories was just an overall great feeling.”