Two International Students Brought Together at UT Fall in Love, Get Married

When Eduardo Maldonado Cruz first made the journey from Mexico City to The University of Texas in 2018 for the Academic English Program, he was concentrated on one goal: refining his English to prepare for his admission into UT Petroleum and Geosystems Engineering. He never would have anticipated that once he began the English program, he would accomplish another major milestone—meeting fellow international student and the love of his life, Paulina Gallegos.

Eduardo and Paulina both received grants from the US-Mexico Commission for Educational and Cultural Exchange (COMEXUS)—the equivalent of the Fulbright Program in Mexico—which allowed them to study in the U.S. The two met in the Academic English Program at Texas Global, and as they pursued their individual career goals in the U.S., they fell in love and were determined to stay together after the semester-long program ended. Eduardo would soon start his Ph.D. program at UT, but Paulina would have to return to Mexico as she applied for graduate schools.

After months of studying to improve her English and applying to different master’s programs, she was accepted into the UT School of Architecture, and joined Eduardo in Austin the next year. The couple got married in April 2019 in Monterrey, Mexico, and now study together on campus as they complete their degrees.

Read their love story, told by Paulina, in the Q & A below.

How did you meet?

It was a Saturday, and we were going to start the Academic English Program the following week. The program was sponsored by COMEXUS to prepare for our graduate studies. We both applied for that scholarship in 2017 and started the AEP program in January 2018.

We first met on January 13, 2018. Eduardo is a very serious guy and we only talked for five minutes that first day, however, it was enough for me to know that I wanted to be his friend. He was such a polite man and I realized he was really smart. After that first day, we had the luck of being in the exact same English level and sharing the same classes.

That is how we started talking more. It was like we knew each other for a long time. We became friends and started to share almost every day together in Austin.

During our time studying English in Austin, we used to go to the rooftop of our building to talk about ourselves and watch the city at night. We used to talk about our dreams, families and future goals. I think this is how we fell in love.

While we were dating, we also escaped to New York! It was an amazing trip—we loved the city and we got to know each other well. 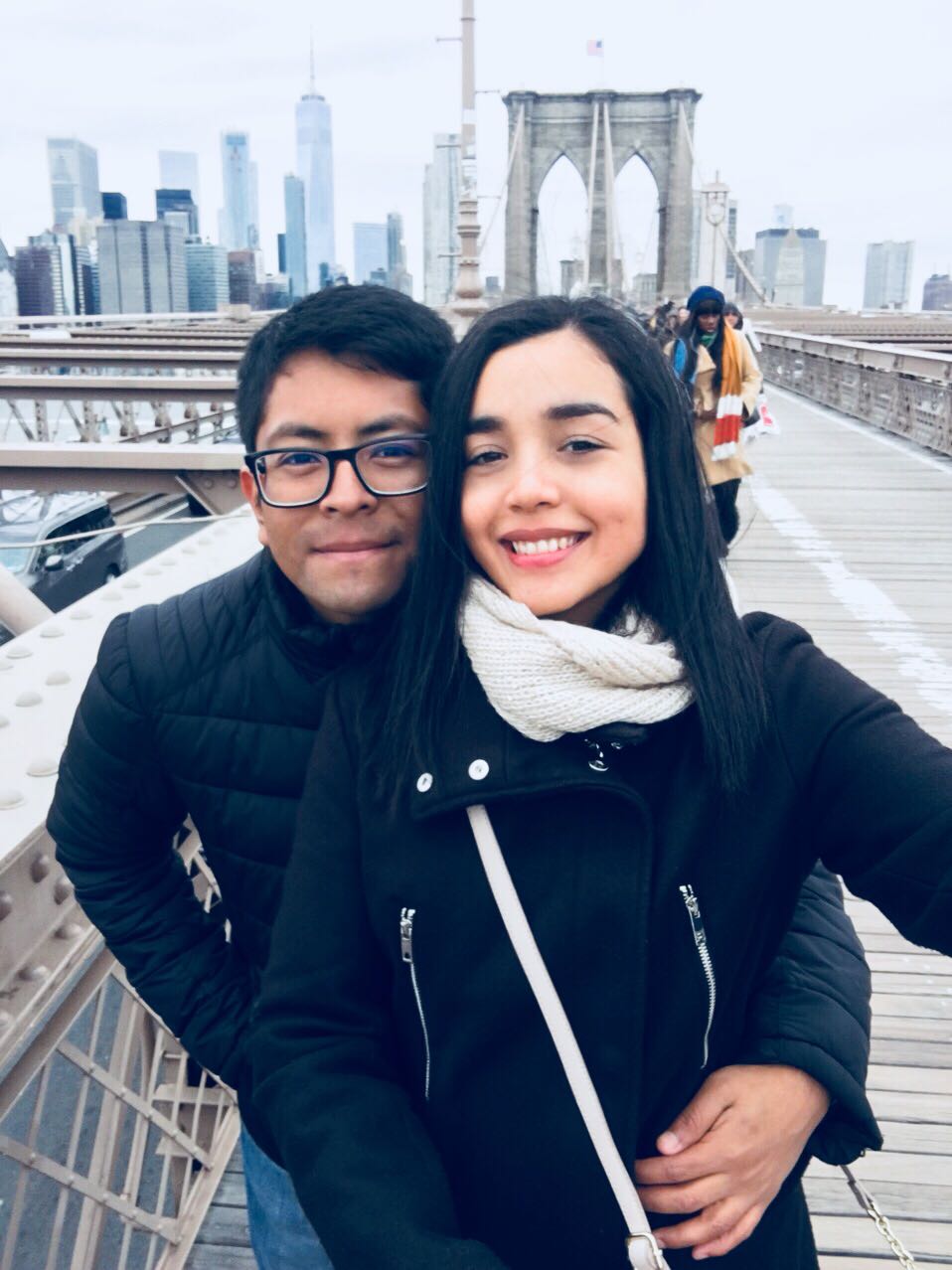 What did you and Eduardo do in the time between completing the English program and starting at UT?

Eduardo was already admitted to UT in fall 2018 and started preparing to study in the U.S. I went back to Mexico and started working for a construction company while applying to several universities. In the meantime, we kept our relationship strong by always talking and visiting each other whenever we could.

I applied to UT and was very happy to be admitted for fall 2019 to pursue my Master’s degree in Interior Design and to be with Eduardo again.

I traveled from Mexico to visit him in November 2018 and we had planned to spend the weekend together. As a surprise, he took me to a beautiful park here in Austin. The day was sunny and beautiful; we had a great view of the lake. In that moment, he knelt down and opened the ring box. He told me what I meant to him and that he wanted to spend the rest of his life with me. I hugged him and said yes because, of course, he is the love of my life and the most wonderful man. I truly admire, respect and love him!

We got married on April 13, 2019!  It was one of the happiest days we’ve ever had. We were surrounded by family and friends at an outdoor wedding in Monterrey Mexico. We planned everything in only five months! We got married in a church during the morning and after that we had our civil wedding during the sunset. It was such a beautiful day! We danced, and enjoyed the moment with our loved ones.

How has the English program impacted you and your career goals?

When we first came to Austin, all the activities and the chance to be part of the AEP program along with the incredible staff at Texas Global made our stay not just great but incredible. It gave us the opportunity to get together and make friends while preparing for graduate school. We met incredible professors as part of the AEP program and in general Texas Global brings to us a lot of good memories and experiences that added value to our personal and professional lives.

I am currently in the second semester of the Master’s in Interior Design program at the School of Architecture. Eduardo started his Ph.D. studies in August 2018 and will be graduating in 2023.

I am really happy to be a graduate student at UT Austin, and during my Master’s studies I hope to have the opportunity to apply for an internship and work in the design field in the U.S. Eduardo is just starting his second year in the Ph.D. petroleum engineering program. He was an intern for a big oil company last summer and he is really excited about his research, classes and new opportunities for the future.