India is often described as colorful and chaotic, busy and fast-paced—a symphony of street sounds. Yet, what impressed Texas alumna Jean St. Clair the most was the welcoming spirit. "People were so open and giving in general," she describes.

The linguist describes the combination of sounds made by music, street vendors, and car horns as a form of communication, "[it felt] like a conversation that they are all having with one another."

Now St. Clair is making a gift of her own by endowing a scholarship that will allow students at The University of Texas at Austin to take their education abroad and experience the world for themselves.

While visiting a new country may be overwhelming, St. Clair is familiar with the process of observing and learning from the unknown. "Delhi was an immersion process,” she describes. “It was like going to a language school or an intensive cultural school. It was very powerful."

St. Clair's enthusiasm for languages and cultures started in her youth. After receiving her Bachelor's Degree in French from Trinity University, she spent a year abroad studying German and French. Upon her return to the United States, she enrolled at Texas where she earned her Master's in Medieval French.

She launched her career in the corporate world in the late 1970's at EDS (Electronic Data Systems, a Hewlett Packard Company). She gained knowledge about computers and their language and says "it was a jump from the academic world to the business world. I had been accustomed to beautifully ornate sentences hung in this nice symmetrical way with little clauses, but nobody had time for that. I had to learn to write again. I had to learn to speak again."

Years later, St. Clair transitioned to the company's marketing department and guide teams with diverse skills in the creation of proposal and marketing materials. "I spent a lot of time teaching people how to communicate in writing complex technical information for marketing,” she explains. “That was really challenging and rewarding."

Since retiring from EDS' Government and Health Systems Marketing Division, St. Clair has spent much of her time traveling. She has joined the Texas Exes Flying Longhorns on fourteen different expeditions around the globe. 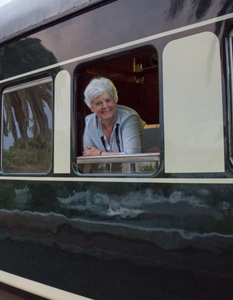 "It was always my goal when I was younger to get to this point where I could do this," she says.  These trips give her the opportunity to reconnect with alumni, visit sites she once learned from through textbooks, and practice her photography skills.

In addition her recent trip to South Asia, she has traveled to Northern Italy, Russia, Ukraine, Egypt, Jordan, Turkey, Patagonia, Tanzania, Australia, New Zealand, Iceland, South Africa, and Japan. When asked about her favorite country to visit, she quickly responds, "The last one. I can't pick a favorite because they are all so different." St. Clair is currently planning trips to Vietnam, Cambodia, and Greece.

A witness and living testimony of the benefits of traveling and bilingualism, St. Clair firmly believes it is important to learn new languages and immerse yourself in new cultures in order to gain a new perspective on communication.

Her experiences have motivated her to leave a mark in the world by endowing a scholarship to make study abroad possible for more UT students. She hopes that this gift will give them the opportunity to be curious, to study in other countries, but most importantly, to help them learn about other cultures and appreciate what is not familiar to prepare them for success in a globalized economy.